In 2003, with the release of Xdebug 1.2, Derick Rethans introduced the ability to collect code coverage data to the PHP ecosystem for the first time. In 2004, with the release of PHPUnit 2, Sebastian Bergmann made the first real use of this new power by allowing developers to evaluate the effectiveness of their test suites by generating coverage reports.

Since then, php-code-coverage has been spun out from PHPUnit into a reusable standalone component, and PHPDBG and PCOV have been created as alternative coverage drivers. Fundamentally however, nothing has changed for developers about the basic process in the past 16 years.

In August 2020 with the release of php-code-coverage 9.0 and the linked releases of PHPUnit 9.3 and behat-code-coverage 5.0 a new way of looking at coverage will become available.

A quick recap of the basics

Most PHP developers will be familiar with the concept of writing automated tests for your code. Closely linked to that concept, is that of code coverage, which is the idea of measuring the percentage of your code that is executed or "covered" by the test suite. For example, if we had the following code:

We could write a PHPUnit test as follows:

Running that through PHPUnit confirms that in this trivial example, we have achieved 100% coverage.

In that example code however, there was actually a small potential bug. If $denominator is 0 then we'll get a divide by zero error. Let's patch that and see what happens.

Even though line 12 now has a ternary if/else in it, and even though we haven't written a test to check if our handling of 0 is correct the report is telling us we still have 100% code coverage.

Other code constructs can often exhibit the same problems when simply counting whether a line was executed or not, for example:

Xdebug since version 2.3 has actually had the ability to collect not just the line-based metrics that we all know, but also the alternative metrics of branch and path coverage. Introducing the feature, Derick's blog post ended with this infamous statement:

Now it's just waiting until Sebastian (or somebody else) has time to upgrade PHP_CodeCoverage to show the branch and path coverage. Happy hacking!

After waiting 5 years for this mysterious "somebody else"👀 to show up, I decided to give implementing it a go myself.

Many thanks to Sebastian Bergmann for accepting my pull requests.

In all but the simplest code, there are places where the execution path can diverge in 2 (or more ways). These occur at every decision point, for example at every if/else or while. Each "side" of those divergence points is its own branch. Where there is no decision point, then the execution flow has just a single branch.

N.B. Although the same tree-based metaphor is used, a branch in this context is not the same thing as a branch in a version control system, don't get them confused!

When branch and path coverage is enabled, the generated HTML report from php-code-coverage now includes additional views to show the branch coverage and the path coverage alongside the traditional line coverage report. Here's what the branch view looks like using the same example code as before:

As you can see, the summary box at the top of the page indicates immediately that although we have 100% coverage on the line-based metric, that we don't on either the branch or path basis (paths are detailed in the next section).

Additionally, line 12 is highlighted in warning yellow to indicate that coverage for that particular line is incomplete (a line with 0% coverage would show in red, consistent with the traditional view).

Such differences between what the PHP interpreter considers to be a logically distinct branch of code, and the mental model of a developer can make understanding the numbers tricky. For example if you asked me how many branches calculatePercent() had, I would say the answer is 2 (the special case for 0 and the general case). However, looking at the report from php-code-coverage above, this 1 line function actually has…4?!

To help developer understanding of what a branch is, and also to help identify more clearly branches that are hidden from source code, the branch report also has a secondary view. This can be found underneath the main one, and shows an exploded view of each individual branch. It looks like this:

It's still not completely obvious, but from that it is now possible to understand what the branches in calculatePercent() actually are:

Mentally mapping branches back to individual pieces of source code is a new skill that takes a little bit of practice, but it's definitely easier to perform on code that is easy to read and understand in the first place. If your code is full of "clever" 1-liners where multiple pieces of logic combine like this one, then expect more difficulty compared to code that prefers to structure things over multiple lines where the line/branch relationship is more likely to be 1-1. Written in a different style, the same logic would look this instead:

If you're using php-code-coverage's Clover report to export coverage data to another system, this now also benefits from having branch coverage enabled by now being able to export data under the conditionals and coveredconditionals keys. Previously (or with branch coverage disabled), these values are hard-coded to 0 in the export.

Paths are the possible combinations of branches. In the case of the calculatePercent() example, there are 2 possible paths as outlined above:

Often however, the number of paths is more than than the number of branches for example in code that has many conditionals and loops. The following example taken from php-code-coverage has 23 branches, but there are actually 65 different combinations of execution path that can be taken through the function:

If you're struggling to find all 23 branches, don't forget that each foreach might receive an empty iterator, and each if has an invisible else

Yes, that would mean 65 testcases to get 100% path coverage.

The HTML report from php-code-coverage also includes a secondary per-path view in the same style as for branches that shows which ones are covered by a test and which aren't.

Enabling path coverage also has 1 other effect on the displayed metrics and that is on the reported CRAP score. The definition promulgated by crap4j.org uses percentage path coverage as an input into the calculation which historically has not been an option for PHP which has used percentage line coverage as a substitute. The effect of the change is that for small functions with good coverage, your reported CRAP score is likely to stay the same or even decrease. Functions with many paths and poor coverage will start to see much larger numbers.

Branch and path coverage are enabled or disabled together as they are just different views into the same underlying execution data.

For PHPUnit 9.3+, the additional metrics are disabled by default and can be enabled either via the CLI or via the phpunit.xml configuration file but only when running under Xdebug. Attempting to enable the feature when using either PCOV or PHPDBG will result in a warning about incompatible configuration and no coverage will be collected.

For phpunit.xml, set the pathCoverage attribute to true on the coverage element.

PHPUnit 9.3 also introduces major changes to the format of its configuration file so the structure in the above example probably looks different to what you're used to seeing

For behat-code-coverage 5.0+, configuration is via behat.yml using the branchAndPathCoverage attribute. It will warn, but still generate coverage if you try and enable it when using a driver other than Xdebug to make it easier to use the same configuration file in disparate environments. When not configured explicitly, it will be enabled by default when running under Xdebug.

Which metric should I use?

Speaking personally, I will be using the new metrics wherever possible, and having tested them against a few different codebases to figure out what "normal" looks like, I think I'm likely to settle on the hybrid approach outlined below for my own projects. For professional corporate work, whether to switch metrics is obviously a team discussion and I look forward with interest to find out if wider consensus is in alignment with my own thinking or if it goes in a different direction.

100% path coverage is undoubtedly the holy grail, and where reasonably possible I think it's a good metric to aim at even if you don't hit it - if you're writing tests, you should be thinking about things like edge cases anyway and path coverage helps show whether you got them all.

However, where a method has tens, hundreds or even thousands of paths which is actually not uncommon for reasonably complex things, then I won't be spending the time to write the hundreds of tests necessary to achieve that. Reasonably, for me, stops at the single digits. Testing is not an intrinsic good, but is a risk mitigation tool and an investment in the future. Tests should have a positive return on investment, and spending time writing that many tests is rarely likely to pay off. In those situations, I am likely to aim for good branch coverage instead as that will at least ensure that I've thought what happens at each decision point.

What I will do in cases of high path numbers (identified by now accurate CRAP scores), is evaluate whether the code in in question is doing too many things and whether there exists a sensible way to split it into smaller functions that can be reasoned about more carefully. Sometimes there won't, and that's OK - we don't have to fix every single project risk. Just knowing about them is also a win. It's also important to remember that function boundaries and unit testing of them individually does represent an artificial split of logic and doesn't represent the true complexity of your software on an end to end basis. I would therefore encourage not to split large functions up if you're doing it purely because of scary path numbers. Do it only where the split reduces cognitive load and aids human comprehension.

Are there reasons not to enable the new metrics?

Yes, performance😔. It's not a secret that running code under Xdebug makes it perform incredibly slowly compared to PHP's baseline performance, and enabling branch and path coverage makes it worse due to the additional overhead of all of the additional execution data it now needs to keep track of internally.

The good news is that the necessity to mitigate performance issues inspired general performance improvements inside php-code-coverage that will benefit anyone using Xdebug. Performance of testsuites varies dramatically so it's hard to try and extrapolate a rule of thumb, but generating line-based coverage should now be quicker on every codebase.

Generating branch and path based coverage is still approximately 3𝑥-5𝑥 slower though so do take that into account. You may wish to consider enabling it selectively, perhaps only when running individual test files rather than the entire test suite, or on a nightly "enhanced coverage" build rather than every push to CI.

Xdebug 3 will be significantly faster than current versions due to work being done on modularisation and performance so these caveats should be treated as only applying to Xdebug 2.𝑥. With v3, even with the additional overhead to collect the extra data, it should be possible to generate branch and path coverage in less time than it takes to get just line coverage today!🤞 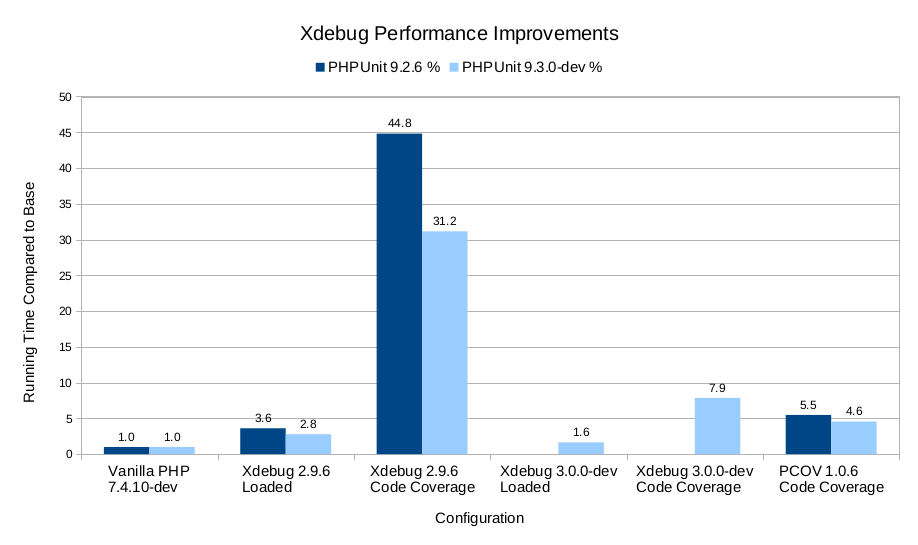 Please do test out the new capabilities and send feedback on whether you think they're useful. In particular ideas for alternative visualisations (perhaps borrowed from other languages) would be very interesting to see.